The giant deer, also known as the giant Irish deer or Irish elk, is one of the largest deer species that ever lived.

Yet why this giant animal, which had massive antlers spanning 3.6m, suddenly went extinct some 10,600 years ago has remained a mystery.

Now a study of its teeth is producing tantalising answers, suggesting the deer couldn't cope with climate change.

As conditions became colder and drier in Ireland at the time, fewer plants grew, gradually starving the deer.

The discovery is published in the journal Palaeogeography, Palaeoclimatology, Palaeoecology.

The giant deer (Megaloceros giganteus) has become famous over the past few centuries.

In the early 1800s, discoveries of its remains opened up the debate about whether animal species had previously become extinct, and whether new life-forms could be discovered in the fossil record.

Around this time, conflicting ideas as to why the animal went extinct began to emerge.

Initial ideas ranged from the Biblical flood described by Genesis, to the idea that humans had wiped them out.

However, the archaeological record suggests that people did not arrive in Ireland until after the last Ice Age, after most giant deer had disappeared.

There is also little evidence that the deer had any predators in Ireland.

A popular idea that also emerged was that the deer's huge antlers, spanning up to 3.6m, grew disproportionately large due to sexual selection.

Females became attracted to and mated with males with ever larger antlers, according to the idea, and eventually the antlers became so unwieldy that the deer became mired in clay soils, where they perished. 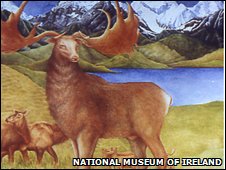 "Yet this is too simplistic an answer for why such a massive population of apparently thriving organisms could go extinct suddenly," says Ms Kendra Chritz, who conducted the study at the University College (UCD), Dublin, Ireland and the National Museum of Ireland while studying for an undergraduate degree at the University of Portland, in Oregon, US.

By studying levels of carbon and oxygen isotopes, and levels of cementum, a material that cements each tooth crown to the gums, the researchers could uncover the time of year each deer was born, their diet and how their lives and behaviour may have changed each year.

The ratios of isotopes revealed that the ecosystem in which the deer lived became stressed by drought.

As a result it changed from being covered in forest to being more open and tundra-like.

The deer also appeared to be born in spring or early summer. But at the time of their extinction, temperatures dropped. 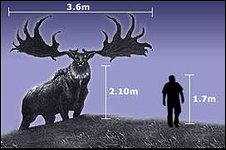 "Giant deer would probably have had a hard time coping with cooler mean annual temperature and a shortened growing season," says Ms Chritz.

That would be particularly bad news for young deer. Most young animals are born in spring precisely because temperatures are warmer and there is more food available.

"It would be very difficult for young deer to cope with all these changes brought on by the Ice Age, as well as support the energetic demands of their growing bodies," concludes Ms Chritz, who is now studying for her PhD in palaeoecology at the University of Utah in Salt Lake City, US.

Data from the cementum, which grows each year much like tree rings, indicates that the deer lived from 6.5 to 14 years old, and they possessed mature antlers by autumn, similar to other living deer species.

Though often called the Irish elk, Megaloceros giganteus is actually a deer species.

Though most abundant in Ireland, it was not confined to the island, with populations living across Europe and Western Asia from 400,000 to 10,600 years ago.

The deer rapidly disappeared across most of the range at the end of the last glacial transition, though giant deer remains have been uncovered in Siberia that date to around 7,000 years before present.

"That means that mainland giant deer had some sort of refugia from the Ice Age before they met their ultimate extinction; they were able to move to a better environment and survive later," says Ms Chritz.

But those giant deer in Ireland "had the misfortune to be trapped on an island with nowhere to go."