If you made any changes in Pure these will be visible here soon.

Dr Ulrike M Vieten is a Lecturer in Sociology (of Gender, Migration and Difference), who joined Queen's University Belfast as one of the QUB Fellows, in 2015.

Dr Vieten was awarded a Doctor in Philosophy (PhD) by the University of East London (UEL), England, in 2008, and a MA in Gender & Ethnic Studies by the University of Greenwich, also Britain, in 2004. In Germany she read Law (Bremen) and Social Sciences (Oldenburg, MA), and worked on gender equality implementation and law in the 1990s.

Dr Vieten held various post-doc positions and Research Fellowships at the VU Amsterdam, the University of Sheffield and the University Luxembourg, beforehand.

Going beyond the nation state sociological lens she incorporates cosmopolitan and interdisciplinay (feminist-intersectional) methodologies in her research.

Theoretically, Dr Vieten is inspired by feminist thinkers such as Nancy Fraser, Iris Marion Young, bell hooks, Kimberle Crenshaw, Nira Yuval-Davis, but also Sylvia Walby with respect to her work on the notion of 'European societalization'.

Closely working with British scholar Nira Yuval-Davis (UEL) in the past, and further today (Social Scientists Against Hostile Environment -Social Scientists Against the Hostile Environment (wordpress.com) ) Dr Vieten explores the historical and contemporary impact of the politics of belonging and racisms on individual positionality, notions of migration and citizenship.

Currently, Dr Vieten is working on another single authored monograph, Loss and Liquid Citzenship: the postmigration condition in a populist age, commissioned by ROUTLEDGE. The monograph investigates the shifting boundaries of the migration-citizenship nexus in different European countries considering the post-Brexit situation and using a de-colonial feminist lens. She will finish the monograph during her sabbatical leave in 2023, also visiting as a Research Fellow the Alfred Deakin Institue for Citizenship and Globalisation, Alfred Deakin University, Melbourne (Australia), mid of April until July 2023.

Dr Vieten does have particular expertise in Gender, Ethnic and Sexualities Studies.

Her research engages theoretically and empirically with the (de-)construction of racialised, classed and gendered group boundaries, looking at processes of normalisation and the critique of it. She published widely on the shifting notions of difference and otherness, in the context of gendered cosmopolitanisms, far-right populisms and archives of racisms, in Europe.

Foremost, Dr Vieten is interested in processes of European societalisation, and the emergence of multi-layered transnational identities. She is a comparativist, who applies a range of qualitative methods (e.g. Critical Discourse Analysis; visual methods/ semiotics; narrative methods). Having worked academically in the Netherlands, Luxembourg and England before coming to Northern Ireland, countries of expertise include: Germany, the Netherlands, the United Kingdom of Great Britain and Northern Ireland, Poland, Austria and Turkey.

Dr Vietens research has been funded by the British Council/ Newton Fund; Northern Ireland Department for the Economy (DfE)/ Global Challenges Research Fund (GCRF) and the Office of the First Minister and Deputy First Minister (OFMDFM), Stormont. The pilot study 'Loss and the Language of Dance' (2017-2018), for example, explored how the experience of loss can be culturally translated across different countries and collective memories, such as Northern Ireland and Turkey'.

Before migrating to London/ UK, in 2002, and embarking on an academic career, Dr Vieten worked professionally (Organisational Sociology) on gender equality implementation as far as Germany is concerned.

The legal commentary in the field of gender equality and German anti-discimination law was published in 2002:

In 2012, Dr Vieten's MONOGRAPH was published with ASHGATE (by now with ROUTLEGE):

Gender and Cosmopolitanism in Europe: A Feminist Approach 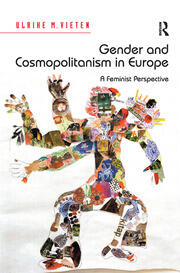 Dr Vieten's theoretical interest in the tension between processes of normalisation (and the critique of it) on the one hand and notions of democratic inclusion led first to a symposium she organised in Amsterdam in 2012; and second, in 2014 to an edited collection:

Dr Vieten will be a Visiting Research Fellow in Melbourne (Australia), at the Alfred Deakin Institute for Citizenship and Globalisation, between mid of April and beginning of July 2023.

Internationally and professionally Dr Vieten is organised with the International Sociological Association (ISA), since 2003. Between 2010 and summer 2018 She was elected Board Member of the ISA Research Committee on Racism, Nationalism, Indigeneity and Ethnicity (RC05). As part of these international activities she was convening and contributing to different ISA Forum and World Congresses of Sociology, e.g. in Durban/ SA (2006), Goeteborg/ Sweden (2010) Buenos Aires/ Argentina (2012), Yokohama/ Japan (2014), Vienna/ Austria (2016), Toronto/ Canada (2018) and Porto Allegre/ Brazil (2020).

Further, she is member of the Irish Sociological Association (SAI), and the European Association of Sociology (ESA).

Since January 2020, Dr Vieten is one of the three Editors in Chief (special responsibility: book reviews) of the refereed European Journal of Cultural and Political Sociology.

TEACHING at QUB - Convenor of:

In the School of Social Sciences, Education and Social Work (SSESW) she convened in 2019/2020

This module - newly designed in 2019 - responds to the need to expand an explicit focus on gender in mainstream sociological teaching and thinking in SSESW, and connecting gender to ongoing international debates on migration. In the previous years global, regional as well as intra-Europan migration issues (e.g. EU citizenship, cross border mobility) were prominent, but due to the Brexit situation (post-2020) the module will deliver a slightly revised approach focusing on global migration, also taking into account the impact of the Covid-19 pandemic crisis, in autumn 2021.

Dr Vieten also is involved in the curriculum development and delivery of the theory module ('Theories, Frameworks and Concepts') as part of the innovative Integrated PhD (IPhD), launched in 2020.

Before coming to NI, and teaching at QUB, Dr Vieten was involved in teaching, designing and convening modules at British universities (UEL/ London Metropolitan University), in the Netherlands (VU Amsterdam) as well as in Germany (University of Applied Studies, Hanover) on

In 2015, UN member states agreed to 17 global Sustainable Development Goals (SDGs) to end poverty, protect the planet and ensure prosperity for all. This person’s work contributes towards the following SDG(s):

Dive into the research topics where Ulrike M Vieten is active. These topic labels come from the works of this person. Together they form a unique fingerprint.